When I saw the picture of Clay Zavada I thought of Sam LeCure right away. There’s a new ‘stache in town and Sam better bring his grooming gear this spring. I would love to see these two guys in the bullpen opening day. They would make a deadly righty/lefty combination. Hitters would be staring at the mustaches instead of the pitch. Update: Sam LeCure was asked on twitter what he thought and said, “I’m impressed by this dudes stache craft. Throw @Corky_Miller in there bc he’s basically the godfather of it all” [ Tweet ] 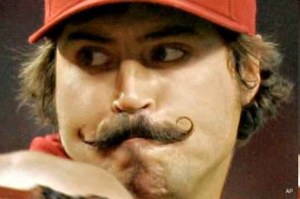